The Chesterfield Kings are a rock band from Rochester, New York, who began as a retro-1960s garage band, and who have heavily mined 1960s music, including some borrowing from the 1960s recordings of The Rolling Stones. Core members are former Distorted Level singer, underground music journalist and avid record collector Greg Prevost, and Andy Babiuk (16 years old at the time of the band’s founding); others have come and gone. The band, named after a defunct brand of unfiltered cigarette, was instrumental in sparking the 1980s garage band revival that launched such groups as the Unclaimed, Marshmallow Overcoat, The Fuzztones, Mystic Eyes, The Cynics, The Optic Nerve, the Secret Service, and the Stomachmouths.

The band continues to tour and release albums with a great sixties throwback sound. Here they are playing their single, I Don’t Understand. Please enjoy. 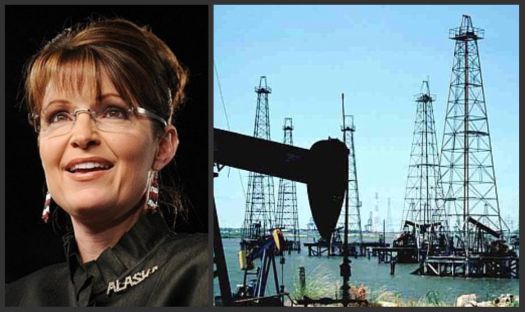 The scenic view from Palin's America

Sarah Palin’s ghostwriter seems to have emerged once again in the October 16, 2009 issue of  the National Review. In an op-ed allegedly written by Alaska’s former ex-quitting governor, Palin has reverted to the failed chant she repeatedly uttered during her failed national candidacy in 2008. That is correct, she is back on the “Drill Baby, Drill” mantra. She argues that in order to jump start the economy, America must start drilling for oil to increase employment and reduce our dependency on foreign oil. Of course that is the same rejected message that she was promoting last year. This time however she has added a new logically ridiculous Palinesque twist to her argument. It goes like this,

In honor of the troops, please click on the song link below to familiarize yourselves with the tune and to have more fun singing along with the parody.

PIPE IN THE GASOLINE

(sung to the Eagles song “Life In The Fast Lane”)

Todd was a school dropout man, he was brain dead and then some
And Sarah was not really witty
They both hooked up and thought they looked so handsome
In the heart of Wasilla city
She had a nasty reputation and he was “First Dude”
The Palins were ruthless when it came to crude
They had one thing in common
With old Uncle Jed
She said, “Drill Baby Drill”
Till Mother Nature’s dead

Are you with me so far?

The plan needed action, so said the dame
A bigger attraction than old John McCain
She called on Joe The Plumber
But she needed more pull
So she called on Joe Sixpack
Did the lipsticked pitbull
Those pipe-lines on the landscape, could seal her fate
So long as she had her cronies spreading politics of hate
The Palin fan base is not very bright
They are all old, straight and male and all of them are white, don’t doubt it

Drilling and boring, blinded by thirst
She couldn’t handle Gibson
Katie Couric was worse
She said, listen people, don’t you know I’m “mavericky”?
I can see Russia from my house, even Tina Fey agrees
Mac said, call Rush Limbaugh, I think we’re gonna crash
The polls are heading downward and we need some instant cash
They were lookin’ for some leeway
The election was lost
She didn’t care there was oil ‘neath that permafrost, so it was