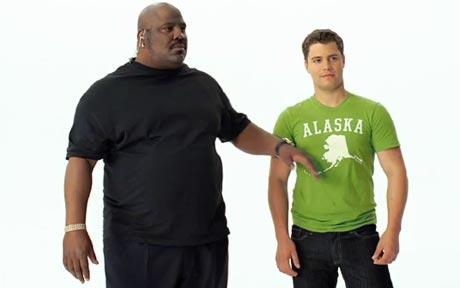 Levi now does it with protection

The extended Palin Clan is once again doing what it does best. To wit, injecting itself into the spotlight in embarrassing fashion. This time it is the Johnston branch of the family that assumes the starring role.

First, Levi Johnston stars in a television commercial for a brand of pistachios in which a tasteless reference to his failure to practice safe sex is the hook line. It should also be noted that the company is simultaneously airing another commercial starring Caitlin Upton, the brain dead former Miss Teen South Carolina who last year made an ass of herself while trying to explain why many Americans could not locate the United States on a map. The pistachio people sure picked a couple of nuts.

In other breaking news, we have learned that Levi Johnston will be appearing nude in Playgirl magazine. We had a hint of this development a few months ago when US magazine revealed that Johnston said he would be willing to pose nude if the price was right. I guess the price was right.

This of course brings us to today’s song parody. Please click on the song link below to familiarize yourselves with the tune and to have more fun singing along.

Levi, Levi wants some money
He wants a lot they say
Spends his days hunting
When he’s not clubbing down in LA

He was born a pauper to his mom on the third of May
Bristol was his chum, she said, “let’s wed”
And they had a son
Tripp E. Johnston is that son today

And Levi, he plans to show his penis
To anyone that will buy
Posing on a sailboat sailing
Sporting those,  hockey player thighs

He’ll be a showstopper not a bum by next Christmas day
First Dude will say, “where’s the support pay?”
And, “where is my gun?”
Levi, son, you’ll never get away