The Continuing Saga Of Sen. Scott Brown’s (R-MA) Refusal To Assist In The Apprehension Of A Child Molester

The Scott Brown childhood sexual molestation story continues to evolve on a near daily basis. Scott Brown ‘s reputation takes another hit as each day passes.

As mentioned in this blog on two separate posts last week, Teapublican Senator Scott Brown of Massachusetts injected himself into the spotlight last February when he issued a press release for his yet unreleased autobiography titled “Against All Odds: My Life of Hardship, Fast Breaks, and Second Chances”. That press release revealed for the first time that the clothing-challenged Brown had been a victim of childhood sexual abuse on at least three occasions and by two different deviants. Two of those molestations occurred at a Massachusetts summer camp and the other happened at an unidentified location. By including that bit of personal red meat in the pre-publication release, there is no denying that the revelation was intended to launch sales of his book.

Brown however, has steadfastly refused to identify his molester and has also refused to assist law enforcement agencies in investigating the matter. When asked by local television station WBZ, at the time of the book’s release, if he would pursue his alleged sexual abuser, Brown said, “I have more important things to do… he’s probably in his 70s today.” Massachusetts Cape and Islands District Attorney, Michael O’Keefe reports that Scott Brown told him he didn’t want to pursue the case.  By means of his investigation obstruction, Scott Brown has painted himself into a corner from which he may not be able to escape without a permanent unsightly stain on his moral character.

The Senator had every right to keep his sexual abuse to himself as a matter of personal privacy. Indeed, he recently admitted that until the release of his book, he never mentioned the molestation to anyone including his mother and wife. That was his prerogative, but as soon as Brown publicized the abuse in his memoir, the rules changed. The criminal allegations have now been made public by Brown and there are resultant ramifications and obligations which must be addressed. Scott Brown now has a moral duty to reveal the identity of his abuser if for no other reason than to prevent this sexual predator from hurting more children. It makes no difference that the criminal is “probably in his 70′s” because there are numerous examples of convicted sexual predators in that age range. Additionally, inasmuch as sex offenders tend to repeat their crimes, it was quite likely that an identification made by a victim with Brown’s stature would urge any other past victims to come forward.

That is precisely what has happened since Brown’s confession. Early last week an unidentified man came forward and claimed that he was molested at a Massachusetts summer camp (Camp Good News) where it has been confirmed that Brown also stayed. Indeed, this second victim said he came forward as the result of Brown’s disclosure. The difference between this victim and the clothing-challenged Senator however, is that this man had the guts and moral fortitude to assist law enforcement in its attempts to capture a child molester on the loose. In fact, the victim’s lawyer Mitchell Garabedian, said that his client would “fully cooperate” with any investigation because “he wants to make the world a safer place for children.”

Shortly after this new victim contacted law enforcement, we learned that the alleged molester Charles Devita, took his own life when he learned that he was being investigated. Brown has said that Devita was not his molester. If Devita was indeed a child abusing sexual deviant, then his reign of terror has ended and he will never violate a child again. The suicide occurred so quickly on the heels of the identification that it would appear that the person either felt that his capture was imminent or he suffered from an uncontrollable level of guilt. Since then, Garabedian has been contacted by two more brave men that claim to have been sexually molested at the camp by Devita as well as an additional brave man and woman who claim to have been molested at the camp by someone else. The investigation by law enforcement of that “someone else” is now under way and it is likely that if there is evidence of his guilt, that “someone else” will be brought to justice and another child molester will be prevented from re-offending.

All the while, Scott Brown continues to refuse to divulge the identity of his abuser to law enforcement agencies while maintaining that his molester was not Devita. This means that Brown continues to enable his molester to roam freely with the potential to defile again. Brown appeared on Boston radio host Howie Carr’s program on WRKO AM 680 last Wednesday and was confronted by the host regarding Brown’s refusal to assist in bringing a potentially dangerous child molester to justice.

Carr asked the following question: Isn’t it important for you to come out and name or at least cooperate?

Brown responded: Howie, nobody has asked me to do anything.

Carr then said: But, can we agree that pedophiles don’t usually stop committing these crimes?

Carr then followed with: So, isn’t it the best move to inform the authorities who molested you?

Brown responded: Howie, I have no evidence that the person who did it to me 42 years ago is no. 1 even alive and no. 2 is doing it again…If I had any … inclination whatsoever I certainly would do anything… but once again, I’m moving forward in my own way…

Carr followed-up with:  …So, O’Keefe (Cape and Islands District Attorney) has not spoken to you. Is that what you are saying?

Brown said:  I’m not gonna talk to you about it anymore because it’s really nothing to do with what I’m doing on Capitol Hill right now.

Carr then put Brown on the spot again by saying:  OK, one last question. You don’t feel any guilt about what happened this morning (i.e. the alleged suspect’s suicide)?

Carr:  But there could be other victims.

Brown’s non-answer:  If that’s the case. If me and the young man who came forward have given other people the strength to move forward and come out and talk about it, then it’s great.

Here is the audio link of the Carr/Brown interview. The juicy stuff starts at the 1:45 minute mark:  http://audio.wrko.com/a/39260794/senator-scott-brown.htm

Things are coming to a head as more and more brave and selfless victims from Camp Good hope emerge and what they can to help apprehend roaming child sex offenders. Brown’s continued obstruction is inexcusable. It is morally abhorrent for him to profit by means of publicizing his own childhood sexual molestation and then to claim that he wants to keep the identity of the perpetrator a private matter. His book made this a public matter, and victims may be mounting as Scott Brown selfishly protects a child molester by refusing to identify him. These six unheralded abuse victims did the brave thing and not only came forward, but assisted in bringing at least two child molester to justice. In the meantime, Scott Brown cowardly sits on the sidelines counting his book sale royalties while another unidentified child molester may remain on the prowl.

As I have now posted repeatedly, Scott Brown will need more than the Tea Party to win re-election in 2012. Massachusetts Republicans and Democrats may disagree on many issues, but protecting sexual offenders is not one of them.

The Boston Globe reports today that an additional eight brave alleged sexual molestation victims from Camp Good Hope have come forward bringing the total number of potential victims to thirteeen. The thirteen victims have identified “less than five” alleged child molesters. When asked whether an identification by Scott Brown of his alleged molester would be of some assistance,  Attorney Mitchell Garabedian said, ““Would it help if he named the molester? Sure’’. Well Scott, we are waiting. 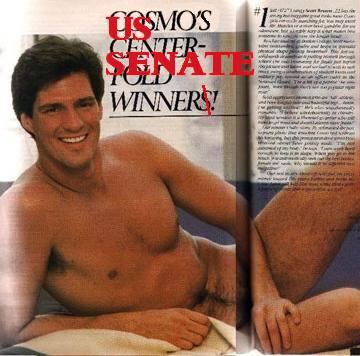 Please take at a look at my WRKO Boston talk radio-based blog also, too. It can be found here: Kevin’s Blog-A Liberal Dose of Reality.

Remember to click on the song link below to familiarize yourselves with the tune and to have more fun singing along with today’s song parody.

If Mass. is your home
And you are full of baloney,
You must surely be – Scott Brown
You have your worries,
With no clothes in snow flurries
You’re a nudist boy – Scott Brown

You’re popular in the woods but were voteless in the city
Your term is only two years Scott, and isn’t that a pity?
You’re sure to lose