← Ding Dong The Witch Is Dead !
Mitt(wit) Romney Is The Great Pretender → 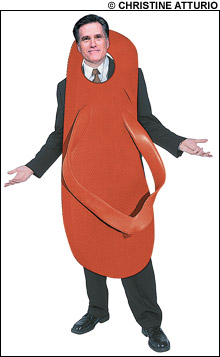 It would appear that Mitt Romney, the once and future GOP candidate for President, is content to allow his moniker as a flip-flopper to continue throughout his campaign. New Hampshire voters should consider his penchant for changing position on most every issue before voting for this contortionist tomorrow in the nation’s first primary election of 2012.

Mitt Romney of course, is the former Republican Massachusetts Governor and failed GOP candidate for President in 2008. He is seeking his party’s presidential nomination once again in 2012. He will however, face a lot of obstacles in attempting to win-over Republican support. The reason? Absolutely nobody understands what he stands for. He is, without doubt, the single biggest flip-flopper that we have ever scene. While Governor of Massachusetts he was in support of safe and legal abortions. He now claims to be staunchly pro-life. While campaigning in Massachusetts, he was a steadfast supporter of gun control regulations. Since then, he has joined the NRA and now claims to support essentially no firearm regulation. While in Massachusetts he favored carbon emission regulations. He now opposes them in any form.

Want more examples? In a 1994 letter to the Log Cabin Republicans, who advocate gay rights, Romney said he was in favor of “gays and lesbians being able to serve openly and honestly” in the military. He now says it would be a mistake to interfere with the “don’t ask, don’t tell” policy. In 1994, he advocated a spending limit on congressional elections and the abolition of political action committees. In 2002, he supported public financing of campaigns from a 10 percent tax on private fundraising. Later, Romney said the McCain-Feingold law limiting campaign contributions is an attack on free speech. In a November 2005 interview with the Boston Globe, he described an immigration overhaul advanced by John McCain as “reasonable.” He has since denounced it as an “amnesty plan.”

Of course, the most damaging of all the Mitt Romney flip-flops is his 360 degree reversal on health care reform policy. It is now common knowledge that although Romney is bending over backwards to join in on the Republican mantra of opposing everything about the Democrats’ 2010 health care reform law, he actually enacted a virtually identical plan in Massachusetts when he was governor… and supported or voted for similar federal plans in 1994, 2006, 2008 and 2009. In fact, Mitt Romney was the pioneer of the dreaded “personal mandate” which compels individuals to purchase health insurance and which is so universally hated by conservatives. In support of his personal mandate, Romney once said,

“I think there are a number of features in the Massachusetts plan that could inform Washington on ways to improve health care for all Americans. The fact that we were able to get people insured without a government option is a model I think they can learn from.”

Ouch! That is surely going to leave a mark!

Certainly, those examples alone prove that Mitt Romney has the ability to flip-flop on issues more than any other candidate in memory, but he is not finished. This past year Romney has been crisscrossing the nation campaigning and fundraising. At most every speaking appearance, he has criticized President Obama by saying,

“When he took office, the economy was in recession. He made it worse. And he made it last longer.”

“Today’s unemployment numbers show that we are going backwards, and that is the wrong direction for America. President Obama’s policies made the recession worse and as a result more people are out of work. These unemployment numbers should not be viewed as just statistics — these are real families facing significant economic peril because President Obama has failed to pull us out of this economic downturn. Americans deserve a president who will make job creation his number one priority.”

As reported in The Washington Post, the Associated Press (AP) performed a fact-check on those statements and proved them both to be false. The economy is now growing (and not shrinking like it was in 2009), the Dow is climbing (and no longer in a free-fall like it was in 2009), and the unemployment rate is down almost two full percentage points from where it was in October 2009.

When confronted with the reality that the economy has improved since Obama has been in office, Romney flip-flopped and claimed that he never said otherwise. He matter of factly told NBC producer Sue Kroll,

“I didn’t say that things are worse.”

That was Mitt Romney’s first flip-flop of July 2011, but he wasn’t finished. Back on May 16th, with great fanfare, Mitt Romney announced that he “raised $10.25 million” at a one-day phone-a-thon in Las Vegas. There is no denying that $10 million is a lot of money to raise in only a single day. Problem is, it never happened. When the Romney campaign unofficially released its numbers for fundraising in the 2nd Quarter on July 1st it revealed that the campaign only raised less than $20 million for the entire quarter. That begged the question; if the campaign allegedly raised over $10 million in a single day, how could it raise less than that amount during the entire 90 other days in that quarter? ThinkProgress.org reports, as it turns out, the campaign wasn’t telling the truth. Yesterday, the Los Angeles Times revealed Romney’s “sleight of hand“:

“The former Massachusetts governor’s campaign told reporters in May that he had raised $10 million in a one-day phone-a-thon in Las Vegas. But the amount actually represented pledges gathered earlier and tallied that day, not just funds actually taken in by the campaign.”

ThinkProgress.org said, “So the campaign not only didn’t raise $10 million in one day, they didn’t even collect $10 million dollars in pledges in one day. Instead, they ‘tallied’ pledges they received ‘earlier’. The Romney campaign purposely misled the press and the public for their own political advantage.”

Mitt(wit) Romney is more fond of flip=flops than a teenage girl.

“Should I Stay Or Should I Go?” song link:  http://www.youtube.com/watch?v=LZk_HnE-cdU

It’s always tease, tease, tease
Just make your mind-up would you please
You were pro-choice but you went back
And your health plan you now attack
So come on Mitt let us know
Is it “yes” or is it “no”?

← Ding Dong The Witch Is Dead !
Mitt(wit) Romney Is The Great Pretender →