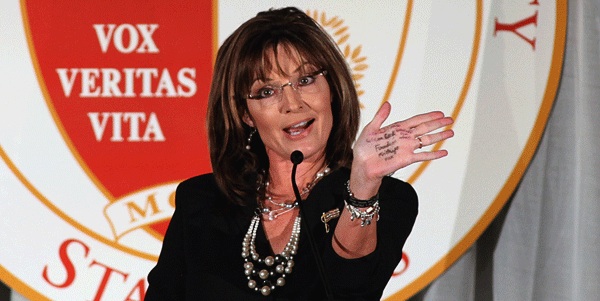 "Gosh darn, I smudged my crib-notes while massaging Todd!"

It has been awfully quiet on the Palin-front since the National Enquirer published its “First Dude In A Kinky Mood” story late last week. To date, there has been no Sarah Palin response to that embarrassing tale. Indeed, all we have heard from the Queen of Quit is that she will be speaking at some Christian school in Texas and we read her possibly ghost-written book-report about the lifeguard days of Ronald Reagan which appeared in The USA Today. Oh yes, we also learned that she was crushed by Mit(wit) Romney in the New Hampshire straw poll. When will the former ex-quitting half-term Governor of Alaska emerge from her den to reveal if her shadow will doom us to 6 more weeks of silence? Sarah, come out, come out wherever you are!

Other than “Massage-Gate”, the only entertaining thing to emerge about Sarah Palin in the last week or so is that video of the two crazy Palinistas performing their re-working of “The Battle Hymn of the Republic” (see below) which has been drawing a ton of interest on Youtube. You can only work with what material you have, so please enjoy this re-re-working of “The Battle Hymn of the Republic” in true Lynnrockets fashion.

(sung to the “Battle Hymn Of The Republic”)

Sarah Palin, her election hopes are sunk
Sarah Palin’s “death panel” lies were debunked
Sarah Palin, she spells just like Dan Quayle
Her dreams of seeing Washington have all now been derailed

Spoken:
Palin’s White House dreams are now nightmares from the past
But Tina Fey and company would have had a blast
Now she’ll ride off with Todd on his brand new Ski-Doo
Sarah’s rosy lips will turn blue and cold
If Palin ever gave us anything,
It was just a great big case of heartburn, Sarah knows.

Closing Dedication:
“I’d like to dedicate this to Tom Brady and the Patriots!!!”