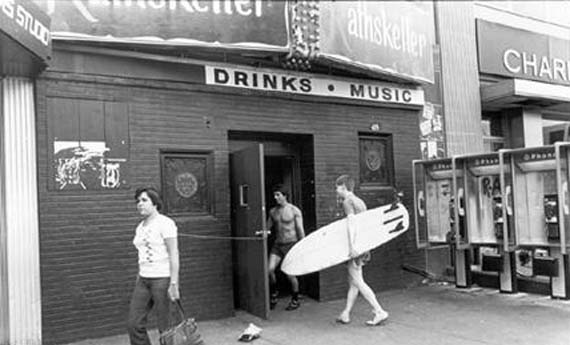 Tonight’s post will not feature a band, but rather a venue. The Rathskeller (known as The Rat for short) was a Kenmore Square live music venue in Boston, Massachusetts that was open from 1974 to 1997 (The Rathskeller was operating during the 1960’s as The Remains were the original house band). As implied by its name “Rathskeller” (German: “council cellar”), the Rathskeller was a dimly-lit establishment with a bar and restaurant on the street level and a rock club in the basement. In many ways it was Boston’s Cavern Club.

The Rathskeller is notable for being one of Greater Boston’s premier music venues for three decades and the starting point for the WBCN Rock & Roll Rumble.

There was also a new Ground Zero for live performance in Boston at that time. Deep below freaky-funky Kenmore Square, the Rathskellar (or, as everyone called it, “The Rat”) was a dingy subterranean dive bar that would appeal to the ever-burgeoning punk movement, and that hosted shows by everyone from Talking Heads and Tom Petty to Thin Lizzy and The Ramones. Everybody played there—and would continue to do so until the club finally closed its doors in 1997 amid a movement toward gentrification.

The Rat was ultimately razed in October 2000 to make way for the Hotel Commonwealth, a 148-room luxury hotel of which Boston University is a limited partner.

In recognition of their place in Boston’s punk rock history, Eastern Standard Kitchen & Drinks,  currently located at 528 Commonwealth Avenue (the former site of The Rat), offers a cocktail known as “The Rat” which consists of Fernet Branca and Coca-Cola.

The Rat is referenced in both Guitar Hero II and Guitar Hero Encore: Rocks the 80s, where one of the venues is called “The Rat Cellar” and it is located in Boston.

Some of the more notable bands to have performed at The Rat are as follows:

Bottom line? The Rat was a hell hole that smelled like piss, puke and stale beer, but it knocked out some of the greatest punk rock I’ve ever heard. R.I.P. Rat, we hardly knew ye!!!

Please enjoy a few video clips of bands playing in the punk era at The Rat. Pay close attention to the audience also as they were right on top of the bands.