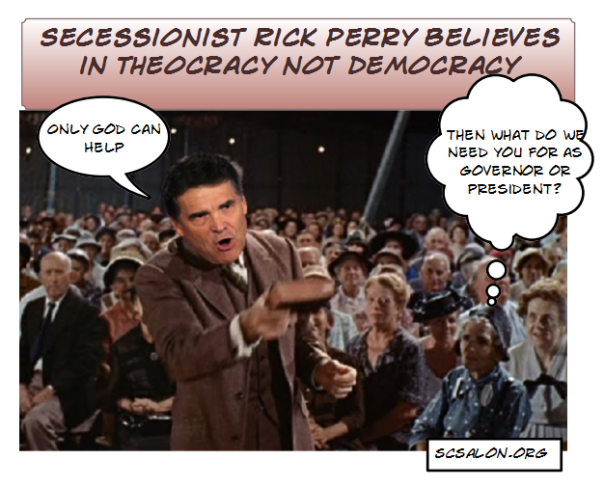 The next time some crazy Tea Party memberr tries to convince you that Bible-thumping Republican Rick Perry would make a great President because of his job creation record in Texas, return the volley with some hard hitting facts.

Inform the Perry fans that although Texas has led the nation in job creation for the last few years, Texas also leads the nation in producing jobs that pay only at or below the minimum wage. Additionally, employment in Texas has been evenly growing for some 20 years which is long before Perry became governor. You should also point out the fact that despite that job growth, the state’s unemployment rate of 8.2 percent is higher than both the rate in Democratic New York and Massachusetts. Indeed Massachusetts’ lower unemployment rate of 7.6 percent was achieved despite the fact that the Bay State has near universal health insurance coverage as the result of its 2006 health reform law which includes personal mandates. In contrast, Texas ranks 50th in the nation when it comes to the percentage of its residents that have health insurance. Perry claims that the national health care reform law which was enacted in 2010 by President Obama is a jobs killer, but the Massachusetts example proves otherwise.

Furthermore, NPR informs us that Texas’ job growth was also helped by the fact that there is “no corporate income tax, no state income tax, and environmental and other state regulations on Texas businesses are kept to a minimum.” Consequently, many corporations have elected to abandon other states and move to Texas. That may suit the purposes of a Texas governor, but it would not help a President who represents all 50 states. It is not job creation for the nation when jobs are reduced in one state and added in another.

An additional problem for Rick Perry’s Texas is that the tax cutting has led to a situation where Texas ranks 44th in expenditures per public school pupil. That has translated directly into Texas’ rank as the 43rd worse state in terms of percentage of high school graduates. This lack of academic achievement has simply provided a steady supply of applicants for all of Texas’ jobs which pay at the minimum wage or below. That probably does not bother Rick Perry all that much however, inasmuch as he was not much of a student himself. He was placed on academic probation while attending Texas A&M.

Rick Perry’s lack of critical thought was quite evident just this week when he accused Federal Reserve Chairman Bernanke of treason if he chose to increase the nation’s money supply. It is hard to imagine that the head of the Fed could commit treason simply by means of performing the duties of his job which are to adjust the money supply. It is a particularly laughable statement when one considers that it was Rick Perry himself who threatened to commit a treasonous act when he suggested in 2009, that Texas may have to secede from the the United States.

These facts should provide all you fellow Rocketeers with ample ammunition when battling Rick Perry supporters. if you really want to get under their skin, tell them: “Read my lips. NO NEW TEXANS!”

(sung to the theme of “The Beverly Hillbillies”)

Come and listen to a story ‘bout a Gov. named Rick
Just like George Bush, a dumb and backwards hick
The Texans know they earn money for their food
Not cuz Rick’s around, it’s that bubbling crude
(Oil that is. Black Gold. Texas Tea)

As for sick folks Rick just hasn’t got a care
No insurance, all they have is prayer
Washington DC is the place he wants to be
So he threw his name in  for the Presidency
(Crazy that is, Bachmann, Newt Gingrich)

Well now its time to say good-bye to Rick and all his kin,
He is in New Hampshire raisin’ dough and campaignin’
He doesn’t know squat ‘bout economic policy
But that does not matter to those fools that drink his tea.
(Perry’s a hillbilly, that’s what we’ll call him now, cow polk)
Y’all come back now, y’hear?