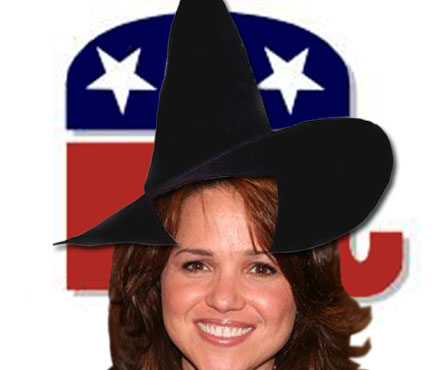 Lynnrockets cannot overemphasize how much fun it is to have Teapublican Christine O’Donnell casting her spells upon us once again. This is even better than the first time because inasmuch as she is not running for any elected office, she cannot inflict any real harm upon the nation.

O’Donnell of course, was a starring cast member in last fall’s traveling sideshow known as “The Tea-Baggers and Mama-Grizzlies Flying Circus“.  These of course, were those crazy Republican female candidates who were endorsed by both the Tea Party and Sarah Palin. Along with O’Donnell, there was Carly Fiorina and Meg Whitman. Thankfully for America they all lost their respective elections.

The Tea Party darling was without doubt, the most intellectually-challenged, gay-baiting, devil-worshipping, tax-evading, donation-abusing, non-masturbator involved in the mid-term elections. Who could forget her “I Am Not A Witch” ad and her hilarious debate performances? As Marlon Brando once said, “she coulda been a contender”. But alas, after she lost, she faded from the public spotlight.

Last week O’Donnell released her memoir which is appropriately titled, “Trouble Maker”. She then embarked upon a media blitz in an attempt to promote sales. She has not disappointed those of us who enjoy a freak-show every now and again. On Wednesday morning she abruptly walked out of a radio interview when she did not like the questions asked by the host. So as to be an equal opportunity quitter (a little like her mentor Sarah Palin), O’Donnell also briefly appeared on CNN’s “Piers Morgan Tonight” but once again stormed off the set when she was asked about things (i.e. gay marriage) she discussed in her book. She then appeared on NBC’s “Today” show and said that Piers Morgan’s questions were “borderline sexual harassment”. Asking her questions about subjects she discussed publicly and in her book is sexual harassment? Give us a break, Christine!

“O’Donnell had no right to reject the questions. Even worse, in declaring them inappropriate she made an ass of herself.

She answered the gay marriage question by declaring, over and over, that the answer could be found in her book, which book she was there to promote, except she refused to discuss her position on gay marriage, which was in the book. She declared she was there to “talk about the issues I chose to talk about in the book,” and when asked by Morgan, “Do you answer that question in the book?” she answered, “I talk about my religious beliefs, yes. I absolutely do.” But she wouldn’t answer his question about gay marriage, and instead accused him of being rude to her.

Nonsensical is too kind. She is a buffoon.”

Lynnrockets is simply glad that Christine O’Donnell is back in the news so that we can re-post one of our favorite song parodies.

(sung to the Rolling Stones song “Sympathy For The Devil”)

Yes, I believe that Jesus Christ
Has spoken through my campaign
He’ll keep Bill Maher quiet
Seal his mouth as I spread hate

Pleased to meet you
Can you guess my name, oh yeah
But what’s puzzling you
Is the nature of my game, oh yeah

That Sarah P.
Is my Tea-Bag Queen
I drank the Kool-Aid
That she proudly made

Pleased to meet you
Hope you guessed my name, oh yeah
Now what’s troubling you
Is the nature of my fame, oh yeah, get down, baby

Pleased to meet you
Hope you guessed my name, oh yeah
Now what’s confusing you
Is just the nature of my game, um yeah

Coons will defeat me
He’ll refer to me
As the mental-case in this race
Use all his well-learned politics
As he lays my soul to waste, um yeah

Pleased to meet you
O’Donnell is my name, um yeah
Now what’s troubling you
Is the nature of my fame, um baby, get down

Woo, who
Oh yeah, get on down
Oh yeah