← Hey, Did You Hear What (fill in name of conservative pundit here) Said This Week?
Scott Brown Falls Into Trap For The Unwary → 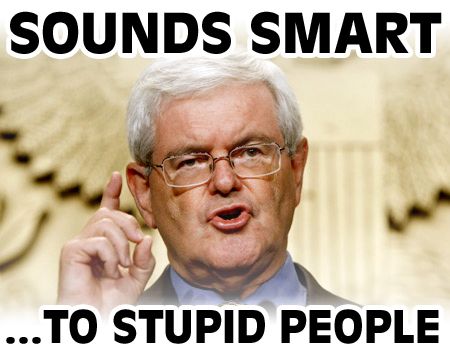 The very conservative and influential (at least to Tea Baggers) National Review magazine appears to be supporting Rick Santorum in his quest for the Republican Presidential nomination. This support however, does not appear to have been earned by Santorum’s actions or policies, but rather as the result of dissatisfaction with both Newt Gingrich and Mitt Romney.

Indeed, on Monday the magazine straight out called for Gingrich to quit the race. The magazine states, “it would be a grave mistake for the party to make someone with such poor judgment and persistent unpopularity its presidential nominee.” The editorial indicates that by the same criticisms that Gingrich levied against Santorum earlier in the campaign, “on his own arguments the proper course for him now is to endorse Santorum and exit.” Ouch! That is sure to leave a vivid and lingering mark.

As for Mitt Romney, the magazine describes the architect of RomneyCare as follows:

“the undramatic figure at the center of the primaries’ drama. Lack of enthusiasm for him has set it all in motion. Romney is trying to win the nomination by pulverizing his rivals. His hope is that enthusiasm will follow when he takes on Obama in the summer and fall. But his attacks on Santorum have been lame, perhaps because they are patently insincere. (Does anyone believe that Romney truly thinks poorly of Santorum’s votes to raise the debt ceiling?)”

The National Review prescribes the following for him:

“Romney is a transactional politician rather than a charismatic one. Maybe he should make the most of it: Tell conservatives what they will get out of a Romney presidency. Entitlements brought under budgetary control. A more market-oriented health-care system. Judges who know their place in the constitutional architecture. Fannie and Freddie extinguished. The defense budget protected. Tax reform, and tax relief for families.”

The magazine seems to be unaware of the obvious however, when it comes to Mitt Romney. The fact is that nobody can trust Romney to do what he says. After all he has flip-flopped regarding his position on abortion; health care reform; gun rights; contraception; climate change; Don’t Ask Don’t Tell; Ronald Reagan and no tax pledges. Romney even flip-flopped on what he said was his favorite book in just a span of a few days (first it was L. Ron Hubbard’s “Battlefield Earth” and then it was “Huckleberry Finn”).

Perhaps conservatives should simply face the facts and believe what Romney said in a moment of veracity while running for Governor of Massachusetts in 2002:

“I think people recognize that I’m not a partisan Republican, that I’m someone who is moderate, and my views are progressive.”

No matter who is named the eventual Republican nominee, there is one person who will be smiling. President Barack Obama.

Since it appears that more and more Republicans are urging Newt Gingrich to go away, our song parody today will focus on the man who is soon to be forgotten history. Please remember to click on the song link below before reading the lyrics because it is so much more fun to sing along while the actual song is playing.

(sung to the Dr. Seuss song “The Grinch That Stole Christmas”)

You’re a has-been, Newt Gingrich
You’re lacking in appeal
Your were ousted as The Speaker
No one wants to hear you squeal
Newt Gingrich

You’re a unicycle
Without even one wheel

These woman that like you, must
Be on work release or parole

You’re a vile one, Newt Gingrich
Your words reek with rancid bile
Your criticism of Bill Clinton
As you’re cheating all the while
Newt Gingrich

You’re a foul one, Newt Gingrich
Your first divorce smelled of skunk
Your wife, Jackie fighting cancer
You told her she was junk
Newt Gingrich

The nicest words to describe you,
Are, as follows, and I quote, Pink. Wank, Punk

Your soul is an appalling dump heap overflowing
With the most disgraceful assortment of Republican
Sound-bytes imaginable,
Mangled up in tangled up knots

You’re the racist, Newt Gingrich
It’s not Judge Sotomayor
You play the race card as a white guy
That’s so laughable I’m sure
Newt Gingrich

← Hey, Did You Hear What (fill in name of conservative pundit here) Said This Week?
Scott Brown Falls Into Trap For The Unwary →