Bachmann Gives Everyone (Including Herself) A Crippling Headache 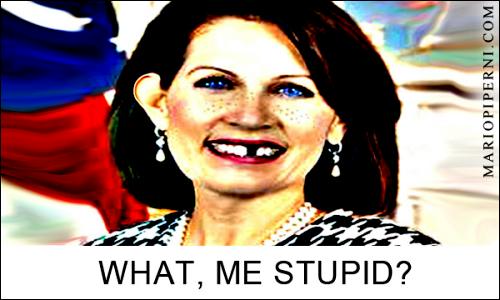 The wacky world of moonbat-crazy Michele Bachmann just keeps on spinning out of control in its own alternative universe. On Planet Bachmann the “shot heard round the world” was fired from New Hampshire. Our nation’s founding fathers were not actual slave owners, but rather they “worked tirelessly to end slavery”. Climate change is a “hoax”. “Hundreds and hundreds” of Nobel Prize winning scientists “believe in intelligent design” and not in the theory of evolution. Judges tell children that they “must learn that homosexuality is normal and you should try it”. Homosexuals “are part of Satan” and federal subsidies and Medicaid are horrible unless they are paid in the form of farm subsidies to Bachmann’s family and Medicaid payments to her husband’s counseling center which tells its patients they can “pray the gay away” (BTW, Marcus Bachmann should take a look in the mirror). Planet Bachmann you see, is very much like Bizarro World, the alternative cube-shaped planet often visited by Superman in which the planetary code of conduct is “Us do opposite of all Earthly things! Us hate beauty! Us love ugliness! Is big crime to make anything perfect on Bizarro World!”

The beauty of the unexplored territories of Planet Bachmann is that we learn something new, weird and interesting every day. For instance, she told us last week,

“If Congress fails to raise the debt ceiling by $2.5 trillion that somehow the United States will go into default and we will lose the full faith and credit of the United States. That is simply not true.”

Well, Michele, on Planet Bachmann it may not be true but here on Planet Earth it certainly is. In fact, the only other person that seems to agree with Bachmann is her special visiting dignitary Ron Paul from the Planet Paul. Everyone with even half a brain here on Earth knows that if the debt ceiling is not raised so that the U.S. can live up to its obligations and pay its bills, the value of the dollar will plummet, the deficit will soar, the nation’s credit rating will plummet, interest rates will soar and we might be driven into an economic depression.

But wait, there is more. We learned yesterday that the Tea Party-backed Republican candidate for President frequently suffers from severe migraine headaches that have at least three times landed her in the hospital. The Daily Caller reports that Bachmann “suffers from stress-induced medical episodes that she has characterized as severe headaches.” So stress causes Bachmann to suffer debilitating headaches which require hospitalization? Well then obviously on Planet Bachmann, the Presidency is a job which induces no stress at all. Unfortunately for Bachmann and all other Earthlings however, the Presidency of the United States is probably the most stress-filled position on Earth. Imagine this conversation with a top adviser:

Adviser: “Ms. President we have a problem and I need to speak to you.”

President Bachmann: “What is it?”

Adviser: “We just received credible information that terrorist hijackers have entered our airspace and plan to crash the aircraft into strategic and symbolic U.S. targets.”

President Bachmann: “I haven’t got time for this now. I just developed a debilitating headache and I need to check in to the hospital. Talk to me in a day or to when this thing passes.”

How is that for a cool headed Commander In Chief? There is also the question as to just what level of stress induces these headaches. Is it the huge amount of stress which occurs during an international event or is it the more mundane type of stress induced  by say, an economic recession or an opposing party Senate minority leader who claims that his highest priority is to have you defeated in the next election? The situations are countless but do we Americans really want the opportunity to have this type of a headache of  our own? Lynnrockets thinks not.

(sung to the Guess Who song “American Woman”)

Republican women, stay away from me
Republican women, from the G.O.P.
You are someone I’ll just ignore
I don’t wanna see your face no more
I got more important things to do
And I will never be sold on you

Now women, I said stay away

Republican women, listen what I say