Coming Soon To A Theatre Nowhere Near You: Sarah Palin’s “The Undefeated” 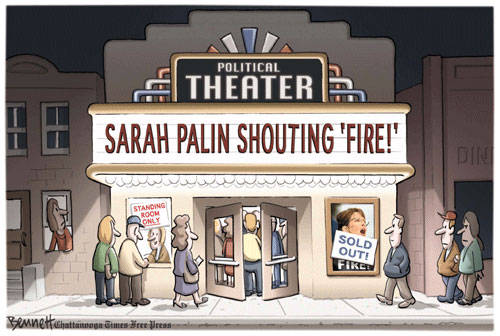 Sarah Palin, the greatest self-promoting narcissist this side of Donald Trump and P.T. Barnum has commissioned  a conservative filmmaker to make a feature-length motion picture about her. Real Clear Politics reports that she hired some unknown by the name of Stephen K. Bannon to produce, film and market the ego-stroking movie titled “The Undefeated”  The film is about Palin’s political career up to her disastrous run for the vice presidency in 2008, which is obvious because she (and John McCain) were soundly defeated in that election.

So, who is this Bannon guy? He is a former Goldman Sachs banker who now makes right-wing propaganda films. His previous flops include, “In The Face Of Evil” (about Ronald Reagan); “Generation Zero” (about how 1960’s hippies caused the 2008 economic collapse) and “Fire From The Heartland” (about conservative women such as Ann Coulter, Michelle Malkin, Michele Bachmann and Palin). Bannon claims to have won Best Documentary at the Liberty Film Festival, but that festival was formed to give awards to right-wing filmmakers. In short, Stephen K. Bannon is an unaccomplished conservative mouthpiece.

In “The Undefeated”, Bannon’s (and Palin’s) goal is, as Real Clear Politcs puts it, “to help catapult Palin from the presidential afterthought she has become in the eyes of many pundits directly to the front lines of the 2012 GOP conversation.” That website also reports that although Palin is not interviewed directly, the film features on-camera interviews and commentaries from 10 Alaskans who played different roles in her political rise, as well as six Lower 48 denizens who defend her in more visceral terms, including prominent conservative firebrands Mark Levin, Andrew Breitbart and Tammy Bruce. How is that for a trio of radical propagandists? The film extols every one of Palin’s minor successes but fails to even make mention of the less flattering topics, such as the Troopergate saga — which had little effect on the VP campaign but left a lastingly negative impression of Palin in the eyes of many Alaskans — and her unimpressive series of interviews with Katie Couric. did you expect anything different?

The film is likely to be released only in a few small hamlets of radical conservatism, so it is unlikely that most Americans will ever be exposed to it. There is however, a little something in the film that progressives might enjoy. The Real Clear Politics article describes the opening sequence as a fast-paced sequence of clips showing some of the prominent celebrities who have used sexist, derogatory and generally vicious language to describe her. Rosie O’Donnell, Matt Damon, Bill Maher, David Letterman, and Howard Stern all have brief cameos before comedian Louis C.K. goes off on a particularly ugly anti-Palin riff. “I hate her more than anybody,” C.K. says at the end of his tirade, the rest of which is unfit to print in a family-friendly blog.

Sarah Palin, the former ex-quitting half-term governor of Alaska has had her own reality television series, is a host on Fox News, has embarked on two nationwide book-signing tours and now is the subject of a feature-length motion picture. Nonetheless, she once portrayed President Barack Obama as more of a celebrity than a serious politician. Who does she think she is kidding?

The Wreck Of The Edmund Fitzgerald song link: http://www.youtube.com/watch?v=6U219P_zs7w

THE WRECK OF THE SARAH L. PALIN

The legend lives on from the North Slope on down
To the town they call Sandpoint, Idaho
The Heath’s one would say, had a daughter that day
Why they kept her, I must say, “I don’t know”

They loaded up the truck and they tested their luck
When they moved to Wasilla, Alaska
Sarah enrolled in school and was nobody’s fool
On the court they called her “Barracuda”.

In 1982 she left for Honolulu
Off to Hawaii Pacific College
She did not last long there nor at anywhere
In her quest for some meaningful knowledge.

She finally did see a journalism degree
After stints at 5 or 6 safety schools
Sometime in between she was a pageant queen
Then she worked in TV for KTUU.

She met up with her fate sometime in ’88
When her TV career was a failin’
And everyone knew, as her parents did too
She would soon be the Bride of Todd Palin.

Long before she did wed, she conceived in his bed
That was the end of her abstinency
While laid out on her back, she gave birth to Lil’ Track
The result of an unwed pregnancy.

She was now in a lurch cuz of her right wing church
But she carried on without a care
She had a beehive hairdo, but had nothing to do
That all changed when she became the Mayor.

She appointed some crooks then she banned some good books
No one lasted if they weren’t on her team
Wasilla’s deficit grew, kids fired-up on homebrew
Not to mention the methamphetamine.

She became the next Guv and to show the state love
She proposed to unite remote shore banks
But once in a bind she politely declined
To the bridge she said,”Thanks but no thanks”.

John McCain now you see had to choose a VP
His campaign was certainly failin’
He wanted a she that was trés “mavericky”
So he chose Alaska’s Sarah Palin.

She gave Levi some lip about visiting Tripp
And Todd’s sister is facing some jailin’
But paternity laws might be the final straw
For the wreck known as Sarah L. Palin