Murdoch Tells Beck To Get The Fox Outta Here 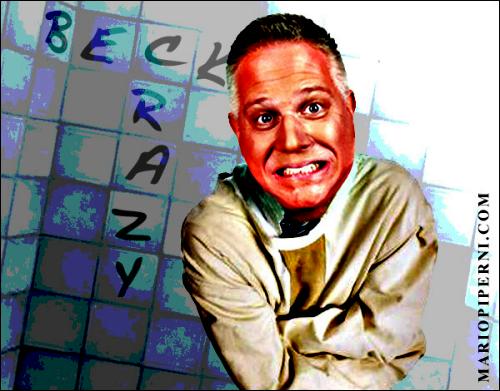 The New York Times reports that moonbat-crazy Glenn Beck may be told to pack up his things and leave Fox News-Ville in December when his contract with the propaganda network expires.

Beck has lost more than a third of his audience since last August and it is easy to see why. He is having a mental breakdown on a nightly basis before our very eyes. His television stage-set resembles the hidden away attic classroom of an addle-minded tenured professor who has been reduced to spewing unintelligible gibberish and writing inane code on a blackboard in front of which there are no longer any sane students. His conspiracy theories are so wildly imaginative and unrealistic that even the other Fox hosts such as Bill O’Reilly and Sean Hannity steer well clear of all things Beckian. Simply stated, Glenn beck has become a raving lunatic and a liability to Fox News.

Glenn Beck’s steady fall from grace began in 2009 when he proclaimed that President Barack Obama has a “deep-seated hatred for white people”. That remark caused such a public backlash that that over 300 advertisers pulled their commercials from his program. Virtually his only remaining sponsors are gold-hawking economic doomsayers. The resultant startling loss of advertising revenue was not something the Fox network enjoyed. Soon thereafter, Beck began to describe wacky conspiracies involving socialists, communists, leftists and Muslims all joining forces to infiltrate the Obama administration and then take down the world. Honestly, even Austin Powers’ arch enemy, the sinister Dr. Evil, could not come up with something that devilish.

Fox executives should have realized that Beck spelled trouble from the very beginning. He has no formal education or work experience in the world of politics. Glenn Beck’s college career consisted of ONE COURSE, not one semester mind you, but one course. His radio background consisted of merely a bunch of shock-jock jobs with a number of different stations. Add to that his history of alcohol and drug abuse, and you have a recipe for some kind of on-air nervous breakdown. That is exactly what we and Beck’s bosses are witnessing at the moment. It is obvious that the network wants to rid itself of Beck’s huge salary and distance itself from his meltdown as soon as possible. For Fox News, December 2011 cannot come soon enough.

Glennie, we didn’t love you
Quite as often as we could have
Still, our goal is to defeat you
Cut your audience in half

Glenn B.
Tell us some more big outrageous lies
Silly
Silly conspiracies made-up in your mind
You should be tranquilized