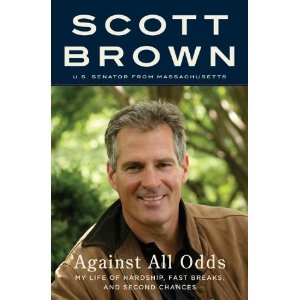 The talk radio airwaves in Boston were abuzz yesterday with discussion of Senator Scott Brown (R-MA). The one-time Tea Party darling who shocked the nation by winning Ted Kennedy’s Senate seat in 2010 had been fading from the public spotlight of late. For a short while, Brown was the 41st GOP Senator and consequently, his was the vote that could kill any Democratic Party bills. That all changed last November when the Republicans captured a few more Senate seats and Brown’s vote was no longer so critical. Brown also lost favor with the Tea Baggers when he sided with the Democrats on a number of bills including the financial reform regulation bill. Moreover, his intentional absence from Sarah Palin’s Boston Tea Party rally last April sealed his fate as a Tea Party has-been.

So, why all the recent interest in all things Scott Brown? The reason is simple. He released his memoir on Monday which is titled, “Against All Odds: My Life of Hardship, Fast Breaks, and Second Chances”. Heck, the title alone takes up the first few pages of text. The book itself however, is not what thrust Brown into the limelight once again. Rather, it was the press release which preceded the book last week wherein Brown revealed for the first time that he had been a victim of childhood sexual abuse on at least three occasions and by two different deviants. By including that bit of personal red meat in the pre-publication release, there is no denying that the revelation was intended to launch sales of his book.

Indeed, despite the other stories about a poor childhood, a history of youthful crime, some basketball, the military and his nude modeling, it was the sexual abuse that was the bombshell. Suddenly Brown appeared on Sunday night’s “60 Minutes”, “The View” and of course on “Fox News” and the discussion always turned to the sexual abuse. There are of course, fewer things more personally devastating to a child than sexual molestation and anybody who was subjected to such treatment deserves much sympathy. The fact that Brown not only overcame it, but then excelled at so many things thereafter is an example of true dedication.

Nevertheless, Brown is now unexpectedly receiving a great deal of blow-back in his own backyard. When asked by local television station WBZ if he would pursue his alleged sexual abuser, Brown said, “I have more important things to do… he’s probably in his 70s today.” Brown has even refused to identify the camp counselor that sexually abused him and declined a request by the Cape Cod & Islands District Attorney Michael O’Keefe to pursue an investigation to find the abuser and stop him. Brown’s post-publication words and actions are not sitting well with his constituents. Nor should they.

Brown has now painted himself into a corner. He had every right to keep his sexual abuse to himself as a matter of personal privacy. Indeed, he admitted last week, that until the release of his book, he never mentioned the molestation to anyone including his mother and wife. That was his prerogative, but as soon as Brown publicized the abuse in his memoir, the rules changed. The criminal allegations have now been made public by Brown and there are resultant ramifications and obligations which must be addressed. Scott Brown now has a moral duty to reveal the identity of his abuser if for no other reason than to prevent this sexual predator from hurting more children. It makes no difference that the criminal is “probably in his 70’s” because there are countless examples of convicted sexual predators in that age range. Additionally, inasmuch as sex offenders tend to repeat their crimes, it is likely that an identification made by a victim with Brown’s stature would urge any other past victims to come forward. Scott Brown’s silence is enabling an alleged child molester to remain on the loose. In short, Brown is personally profiting from his revelations of sexual molestation while doing nothing to prevent other children from suffering the same sexual abuse by the same deviant. That is not the type of leadership we expect from a United States Senator.

All of this also reminds us of Scott Brown’s decision just last autumn to endorse a fellow Republican, state Representative Jeffrey Perry, in his bid to replace Democratic Representative William Delahunt in Congress. During the campaign, it was revealed that Perry, while he was an officer with the Wareham (MA) Police Dept., allegedly covered up the actions of a fellow officer who was eventually found guilty of conducting illegal strip searches of two teen-aged girls allegedly in the presence of Perry. The Boston Globe reported, “One victim, who allowed herself to be identified by her maiden name, Lisa Allen, said in a late-October statement opposing Perry’s election that the then-Wareham sergeant “had to hear me screaming and crying” as Officer Scott Flanagan put his hand down the 14-year-old’s pants and ordered her to lift her bra after he, Perry, and another officer came upon a group of teens suspected of using drugs near a cranberry bog in 1991. Arguing Perry lacked the character to serve in such high office, Allen said: “Perry did not care about protecting teen-aged girls in Wareham from police officer Flanagan. Jeff Perry cared only about protecting police officer Flanagan.” Perry lost the election to Democrat William Delahunt.

Scott Brown endorsed Perry but never directly addressed the former officer’s involvement in the cover-up of the molestation. Rather, he criticized Perry’s opponent for making the subject known. In fact, Brown said, “It’s to the point: ‘Bill, stop with the dirty politics”. Wouldn’t you think that as the result of also having been sexually molested as a child, that Brown would not have considered the female victim’s statements and Delahunt’s criticism as merely “dirty politics”? Wouldn’t Brown have identified with the victim and perhaps second-guessed his endorsement. He did not. Brown simply towed the Republican Party line and supported Perry, and he has now politicized his own sexual molestation and is padding his wallet while doing so. And all this happens while a child molester remains at large because Brown refuses to identify him.

Senator Brown cannot have it both ways. It is morally abhorrent for him to profit by means of publicizing his own childhood sexual molestation and then to claim that he wants to keep the identity of the perpetrator a private matter. His book made this a public matter, and victims may be mounting as Scott Brown selfishly protects a child molester by refusing to identify him.

Scott Brown will need more than the Tea Party to win re-election in 2012. Massachusetts Republicans and Democrats may disagree on many issues, but protecting sexual offenders is not one of them.

Please remember to click on the song link below to familiarize yourselves with the tune and to have more fun singing along with today’s topical song parody. Enjoy!

Now Scottie’s talkin’ double
He loved the Mass. health reform law
He voted for it like the flip-flopping Guvnor
Yet now he has declared war

You see, Scott Brown needs enlightening
He don’t give a damn ‘bout the poor
Scottie Brown’s big mouth should be muzzled
As he’s voted off of the floor

Yeah, on the issues he’s wrong
He won’t be in office long