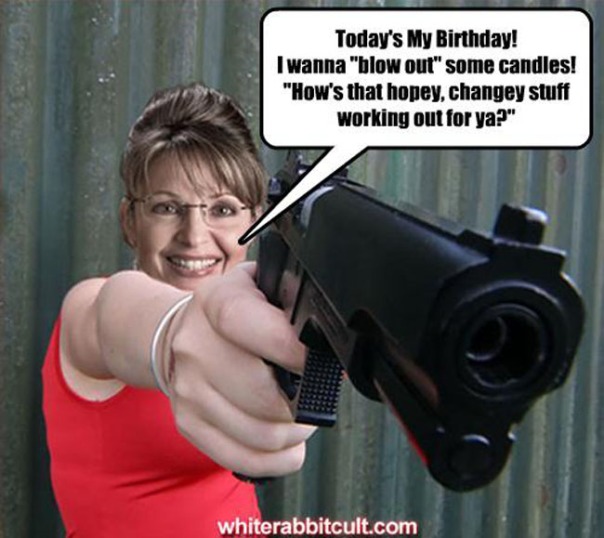 It was a day that will live in infamy. On this very same date exactly 47 years ago in the small town of Standpoint, Idaho, a menace was born.  Charles R. “Chuck” Heath and his wife Sally were cursed with a third child who they named Sarah. From day one the Sarah thing brought ridicule upon the Heaths, and the villagers of Standpoint drove them out of Idaho on a potato truck after only a few months. In no uncertain terms the Heaths were told to take the Sarah thing out of the Lower 48 and to never return.

The disgraced family migrated to the town of Skagway, Alaska where they hid the Sarah thing for almost five years before she was discovered by a dung-heap digger and the family was once again banished by the locals. In the dead of night they surreptitiously made their way to the town of Eagle River, Alaska. For three years they deceived the town folk there into believing that the Sarah thing was some sort of exotic family pet but when the local veterinarian refused to neuter her on the grounds that he did not recognize her species, the gig was up. The Heaths were driven from yet another town and wandered aimlessly until they stumbled upon the lazy hamlet of Wasiila. Chuck quickly deduced that Wasilla was the methamphetamine capital of Alaska and that the dazed and confused citizens were unlikely to pay any attention to their hated spawn. He was correct. Nobody noticed the new addle-minded resident until she was mistakenly elected Mayor on April Fools day in 1996 at the age of 32 (that is 224 in dog years).

Nothing of note happened to the Sarah thing after that other than her election as Governor of Alaska and her nomination as the Republican candidate for Vice President of the United States. Luckily for all involved, she was clobbered in the national election and shortly thereafter she quit the position of Governor after having served only half a term. The world was saved. The Sarah thing would surely fade into obscurity now that she had officially been deemed a quitting loser.

Not so fast! As it turned out, the reports of the Sarah thing’s demise had been greatly exaggerated as the result of the emergence of the villainous Tea Party. That group of under-educated, spelling-challenged, racist, gun-toting, Bible-thumpers found one of their own of the opposite sex to coronate as queen. She even shared their habit of dressing up in funny clothes from a different era. This was a virtual match made in heaven er, hell.

The Sarah Palin thing was revived just like the Frankenstein monster in so many of those movie sequels. She “refudiated’ her critics and commenced a new career; begging for money and selling stuff to her brain-washed fans. She even started her own political action committee so that her supporters could easily finance her lavish lifestyle on a 24/7 basis.

And this brings us full circle to today. Sarah Palin’s birthday. It is impolite to personally ask for cash as a birthday present, but mere social impropriety is no impediment to Sarah Palin. To achieve her goal of grabbing even more money from her Tea-Bagging supporters she has utilized SarahPAC. Palin’s PAC sent a letter to supporters pleading for cash donations in honor of her birthday. It reads, “help me plan a special surprise for Governor Sarah Palin in honor of her birthday on Friday by giving a gift to SarahPAC today.” In an attempt to once again compare herself to Ronald Reagan, the money solicitation contiues with, “Just like Ronald Reagan before her, Governor Palin is despised by the Left because she freely admits her faith in God, is unabashedly proud of America, and fights to limit the long arm of the federal government when it comes to our freedoms and our families.”

This blatant cash-grab is clearly another one of Sarah Palin’s “WTF” moments.

In honor of the troops, please remember to click on the song’s video link below to familiarize yourselves with the tune and to have more fun singing along with tonight’s song parody.

(sung to the Beatles song “Birthday”)