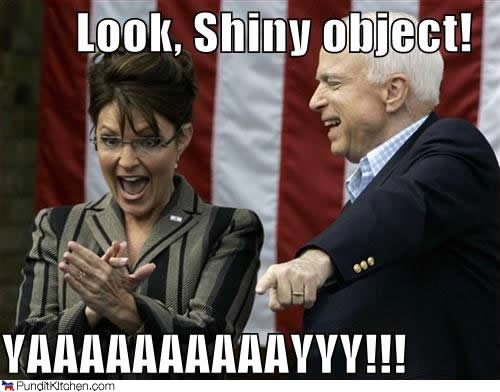 The bad news for Sarah Palin just keeps piling up. Palin’s series of unfortunate events seems to have been triggered by her sniper-sight symbol-laden map and the subsequent Tucson massacre. As the result of her specifically having targeted Gabrielle Giffords in that ill-conceived ad, Sarah Palin will now forever be linked to that tragedy. Since the day of the shootings, everything has gone down hill for the former ex-quitting half-term Governor of Alaska.

First, she made things worse for herself when she unsuccessfully attempted to rehabilitate her image by means of a self-produced video which is now known as her “I Was The Real Victim Of The Tucson Shooting” speech. That was quickly followed by the release of a CBS/New York Times poll of registered voters which revealed that Palin now has only a 19% “favorable” rating. Then she was crushed by Mitt Romney in the New Hampshire straw poll despite the fact that it was heavily attended by Tea Partiers. She suffered further Tea Party disgrace when moonbat-crazy Michele Bachmann was chosen to present the “official” Tea Party response to the President’s State of the Union Address. In an attempt to reclaim some Tea Bagger street cred, Palin then gave her own response to the SOTUA but made a fool of herself by misstating Soviet history and further embarrassed herself with her oft-repeated “WTF” quip. Next, her reality television show was canceled. She then suffered the indignity of having the National Enquirer reveal that her husband cheated on her with an Alaskan prostitute. Immediately thereafter, she was reduced to a sex object when actor Tracy Morgan referred to her as “good masturbation material’.

Well, that is certainly more than most educationally-challenged, violent rhetoric-spewing, death-panel fabricating, mid-term quitting politicians could handle. Fate however, was not through with raining more bad luck down upon Sarah Palin. Her former running mate, John McCain announced yesterday that he will not endorse Sarah Palin should she choose to run for President in 2012. Politico reports that when asked about a 2012 endorsement in the Republican primary, McCain said, “I think I’m staying out of this for the first time in many years.” The non-vote of confidence is not all that surprising in that McCain is fully aware of all the negative things Palin has had to say about the 2008 McCain campaign. He is also sure to remember that Palin tried to steal his moment on election night in 2008 by attempting to give her own concession speech. Nonetheless, if any potential candidate was relying on McCain’s endorsement, it was the Queen of Quit. After all, it was McCain who almost placed her in the position of being merely a heartbeat away from the presidency three years ago. Perhaps then, this is McCain’s way of apologizing to America.

In honor of the troops, please remember to click on the song link below to familiarize yourselves with the tune and to have more fun singing along with today’s Sarah Palin song parody.

IT’S ALL OVER NOW

Well, Palin was around way too long
She winked those eyes, went to Hong Kong
But her heart’s now broken, that’s no lie
Tables turn and now it’s her turn to cry

Well, she thought that she’d be crowned a queen in D.C. Town
She’d spend book deal money to buy herself some fame
She has no clout, that must be a blow to her pride
Tables turn and now it’s Sarah who cries

Well, on Meet The Press Sunday morning, did you hear what they said?
“Palin’s political future is all but dead”
Brooks, Dionne and Murphy really smacked Palin down
Now the whole world knows that she is just a clown