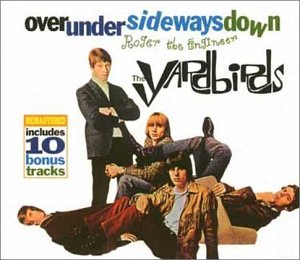 Lynnrockets recently watched the film Julie & Julia about a thirty year old New Yorker who decided to cook every dish in one of Julia Childs’ cookbooks and to blog about it. It was a novel idea so we decided to copy it. No, we will not be cooking in the usual sense (that could start a fire). Rather, we will adapt the recipe a day concept to our nightly music bytes. From now to infinity (didn’t somebody else coin that phrase?) we will post a music video and brief description of the artist or song in a sort of alphabetical order as culled from Tom Moon’s wonderful reference book, 1,000 Recordings To Hear Before You Die (A Listener’s Life List). The book describes both whole albums (remember those) and individual songs from all music genres that are essential listening. Do yourselves a favor and purchase this book. Where the book deals with an individual song, we will post that song, but when an entire album is the subject, we will exercise judicial discretion and post a single song therefrom. So what do you say, let’s get cooking…

At times during their brief existence (1962-1968) The Yardbirds had Eric Clapton, Jeff Beck and/or Jimmy Page on lead guitar. As dynasties go, that’s possibly the best ever in rock. This album was the band’s first to be conceived as an album and not just a collection of singles and it documents the beck era and includes several early track with Page. It’s essential listening for anyone who cares about rock guitar.

Each axman’s tenure brought about a corresponding shift in sound. The Yardbirds started out playing a jittery blues rock with Clapton then, a staunch blues purist. When the band started to shift away from blues with the soaring single “For Your Love”, Clapton left in disgust. Beck came aboard ready to try different styles. His stinging crystal-clear sound drives the determinedly weird “Hot House Of Omagarashid” a wordless chant splayed over a twisted Bo Diddley beat and “He’s Always There”, a straight pop hook embellished with psychedelic guitar musings.

Beck and Page played together for a brief time, on the foreboding “Happenings Ten Years Time Ago” and “Psycho Daisies” features Page on Bass. These tracks solidified the Yardbirds reputation for sonic mayhem; it’s a treasure trove of piercing leads, thick distortion, and other guitar sound-shaping tricks.

Tags: Happenings Ten Years Time Ago, Over Under Sideways Down, Songs, Yardbirds

The mayor wears no clothes

Inasmuch as the final results of the numerous primary elections held Tuesday have not been released yet, Lynnrockets thought it might be fun to comment on another less heralded election bid. I’m sure that most of you have already heard that Sarah Palin’s once and future son-in-law Levi Johnston has announced his candidacy for Mayor of Wasilla, Alaska. It would appear that Johnston would like to follow closely in the footsteps of  the former half-term, ex-quitting Governor of Alaska and former Mayor of Wasilla. Not only is Johnston planning to run for mayor, but he is shopping a reality television series of his campaign at the same time. Even Sarah Palin never attempted such a blatant effort at cross-marketing and showboating. Palin’s reality television career did not take flight until well after she was embarrassingly defeated in the 2008 election.

If Johnston is elected, just imagine how proud the citizens of Wasilla will be to have yet another under-educated dolt running their city. What books might Levi choose to ban? Will Johnston have those same negotiating skills required to push through the construction of a tax-sucking civic building while at the same time having the developer secretly build him a house? Will he wear a three piece suit or his birthday suit? Perhaps we will learn the answers to these questions and more as Johnston’s campaign gets underway.

But what of the reality television series? It is tentatively titled “Loving Levi: The Road to the Mayor’s Office”. After failing in all of his previous attempts to land a series for himself, might this finally be Levi’s golden egg? Don’t count on it. “I’m just incredibly uninterested,” said one network’s executive in charge of unscripted programing. “We’ve seen him naked. We’ve heard him bash the Palins. What more is there that we need to know? He’s a cute kid but not the most interesting person to watch.” Another executive said, “I don’t think he’s a reality TV star. He just doesn’t pop; he’s not an interesting character. He doesn’t have a lot to say, no matter what his name is.” Ouch! If his show does get picked up by some obscure cable network (maybe Fox?), we can be sure that it will not be TLC, because as another TV executive has said, “They already picked their Palin.”

Levi, Levi wants some money
He wants a lot they say
Spends his days hunting
When he’s not clubbing down in LA

He was born a pauper to his mom on the third of May
Bristol was his chum, she said, “let’s wed”
And they had a son
Tripp E. Johnston is that son today

And Levi, he plans to show his penis
To anyone that will buy
Posing on a sailboat sailing
Sporting those,  hockey player thighs

He’ll be a showstopper not a bum by next Christmas day
First Dude will say, “where’s the support pay?”
And, “where is my gun?”
Levi, son, you’ll never get away