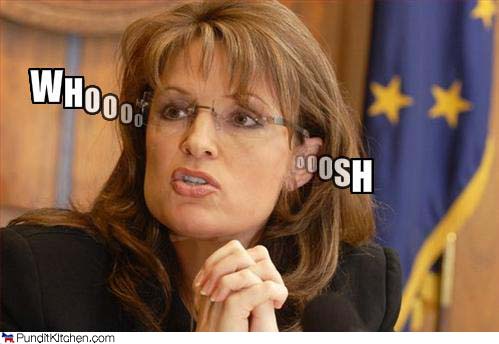 Palin is "over her head"

Sarah Palin suffered a dose of “right back at ya” prescribed by the Democratic National Committee this week. CNN reports that the former Republican vice presidential hopeful (and potential 2012 presidential hopeful) is not letting up in her constant drumbeat of criticism directed about President Obama. But the Democrats, in turn, called her out as well.

After saying Sunday that Arizona’s female Republican governor has more “cojones” than Obama when it comes to immigration and border security, Palin suggested Wednesday night that the 44th president is still trying to figure out his governing philosophy.

Asked about her ongoing narrative that Obama is too weak when it comes to issues like national security and immigration, Palin shared her insights on Fox News Channel (where else?) about why she believes Obama is not doing more to secure the borders. She said,

I think he’s quite complacent, and I think he’s in over his head. And I think he has poor advisers around him. And I think he’s really in flux kind of when it comes to what his governing philosophy actually is. Some of this though is a result of he not having much experience and then a complicit media and maybe some voters who chose to not to allow him to be vetted very closely. It’s a combination of things that’s resulting in a president who’s not taking a strong stand on those things that are the will of the people. Obviously, the will of the people is to enforce the laws that we have on the books.

Think about that quote for a moment. Sarah Palin, the half-term ex-quitting governor of Alaska and current reality television series host believes that President Obama is “in over his head” and was not “vetted very closely”. This, coming from a failed politician who cannot speak in public without resorting to palm printed crib notes. This, coming from an undereducated former candidate who was incapable of coherently answering questions of policy posed by Katie Couric, Charles Gibson or even Fox friendly Bill O’Reilly. If anyone was ever over their head or not vetted properly it was Sarah Palin and the Democrats are now telling the American people. In a response statement e-mailed to CNN, the DNC wrote,

While former half-term governor Palin is certainly an expert in not being vetted, we put our trust in the judgment of the American people who rejected not only the broken policies she and Republicans continue to call for, but also this very kind of childish politics she continues to engage in. What’s been fully vetted and thoroughly rejected by the American people is the failed approach in tone and substance offered by Sarah Palin and her ilk.

In honor of the troops, please click on the song link below to familiarize yourselves with the tune and to have more fun singing along with today’s topical song parody.

Over My Head song link: http://www.youtube.com/watch?v=DDx-YAjpa9E

I’M OVER MY HEAD II

(sung to the Fleetwood Mac song “Over My Head”)

They say DC is paradise
Before going there, I better think twice
I’m over my head
And it don’t feel nice

Nothing to say when I take that mike
I’m just a clown and yet they just might, think I’m crazy,
It’s such a plight

Over my head Mmmm …

I’m over my head
And it don’t feel nice

I’m over my head
And it don’t feel nice