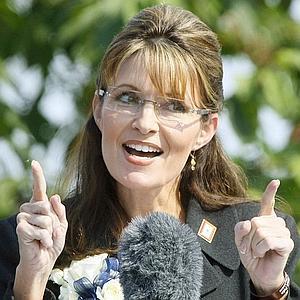 Jan Brewer's Cajones Are This Big

Remember the days immediately following 9/11, right on through the run-ups to both the Afghanistan and Iraq wars, when Republicans labeled any criticism of President George W. Bush as “unpatriotic”? They argued that during wartime, the President must be fully supported by both parties and that any negativism about his policies bordered upon treason. You might also recall that the most vocal solicitor of that mindset was none other than the wholly owned G.O.P. subsidiary known as Fox News. For years Fox hosts such as Bill O’Reilly, Sean Hannity and Glenn Beck broadcast on a nightly basis their newest addition to their list of Democratic traitors who dared to question the President’s tactics regarding national security. The G.O.P. and Fox blindly worshiped Bush and Co. and hailed the virtues of such civil rights restrictions as The Patriot Act, the warrantless wiretapping program and even the illegal torture of detainees. In short, the Republicans and Fox News unequivocally proclaimed that “You are either with us or against us and, if you are against us, you are a traitor”.

Well, something funny happened on the way to 2010. The wars in Afghanistan and Iraq continue, but a Republican is no longer the Commander in Chief. Suddenly, both the G.O.P. and Fox News have come full circle and believe that it is quite appropriate and, dare we say “patriotic”, to criticize the President on matters of national security. And damn the facts, their criticisms of Barack Obama are usually based upon fabricated falsehoods and unadulterated fear mongering.

One of the most despicable purveyors of non-fact based Presidential criticism is none other than Sarah Palin. The former half-term ex-quitting governor of Alaska, failed Republican Vice Presidential candidate and current Fox News contributor cannot go a single day without tweeting, posting an indecipherable Facebook message or taking to the Fox airwaves to spew her uniquely incomprehensible form of anti-Obama rhetoric. Remember her lies about the fictitious “death panels” included in the health care reform law? How about her lie that President Obama would “ban guns if he could” despite the fact that his stated policy on gun ownership is “there’s nothing that I will do as President of the United States that will in any way encroach on the ability of sportsmen to continue that tradition (of owning guns)”. Another example is Palin’s Fox broadcast lie that the Obama administration was hampering the clean-up of the Gulf oil spill by failing to accept help from “the Dutch and the Norwegian (sic)”. Her fictitious accusations go on and on, but we digress.

Palin sank to a new low last Sunday while appearing as a guest on “Fox News Sunday”. While discussing the Obama administration’s partial judicial victory last week in the litigation over Arizona’s controversial immigration law, Palin said  that Arizona’s female Republican governor has “the cojones that our President does not” when it comes to securing America’s borders. You read that correctly, the verbally challenged Palin claimed, in essence, that Jan Brewer has more “balls” than Barack Obama. How is that for showing respect for the office of the President of the United States of America during a time of war? Here is her full quote:

And, Jan Brewer, bless her heart, she’s going to do all that she can to continue down the litigation path to allow secure borders because she’s – Jan Brewer has the cojones that our president does not have to look out for all Americans – not just Arizonans – but all Americans in this desire of ours to secure our borders and allow legal immigration to help build this country. . . . if our own president will not enforce a federal law, more power to Jan Brewer . . . to do what our president won’t do.

Sarah Palin has shown once again that she is a classless hillbilly. To publicly criticize the Commander in Chief by making reference to his genitalia is beyond contempt. What is it with Palin’s obsession with all things sexually related? Remember when in her ghost-written memoir she claimed that two of her daughters were threatened with gang rape at school (although “mama bear” never reported such to either the police or school officials)? There was also the time that she accused her grandson’s father Levi Johnston of being involved in the porn industry for modeling nude in Playgirl while ignoring the fact that she endorsed the  Republican Senate candidate and nude centerfold model Scott Brown.  How about when she accused author Joe McGinniss of peering into daughter Piper’s bedroom? Sarah Palin has sex on the brain and lacks the dignity to keep her thoughts to herself and not on the national airwaves. She is like that friend or relative that you are always afraid to invite to public gatherings for fear that she will embarrass you with some sort of inappropriate sexual remark better suited for the bedroom.

Furthermore, does Palin not realize that we are still at war and by her own standards it is unpatriotic to criticize the President? Additionally, she is ignorant of the fact that the Obama administration has done more to secure our borders and has captured more illegal aliens than the Bush regime. Yet, where was her criticism then? She doesn’t want you to know that there are more National Guard troops at the southern border than at any time in the past and more are on the way. She also doesn’t want you to know that this administration has deported more illegal aliens than did the Bush regime. She wants you to forget that her own running mate, John McCain advocated not only a forgiveness to illegal immigrants, but a path to citizenship. Can you recall her demeaning his cajones? By the way, let’s take a look at Sarah Palin unsuccessfully attempting to explain her policy on illegal immigrants. It is a real laugh to witness her complete lack of understanding how to address the issue.

So there you have it. Sarah Palin is classless because of her complete lack of respect for the office of the President which is exemplified by her vulgar genitalia language. She is unpatriotic (by her own terms) because she undermines a war time President by saying that his policies weaken our national security. She is ignorant because she has no coherent policy of her own. Hey Sarah, let’s put this in terminology you can understand. When you fall on your face during your next political campaign, let’s hope your tetas don’t deflate!

(sung to the Tom Petty & The Heartbreakers song “American Girl”)

Well, she’s an un-American girl
Breakin’ promises
Not much of a thinkin’ girl bear
We wish Palin would live life – somewhere else

After all it is a great big world
And she could take her gun too
And she could go on a –  lyin’ spree
Start one little foreign based new G.O.P.

The truth may just unfold alright
Joe Mac stands alone on his balcony
Yeah, even though her fence is high, Sarah Palin can’t run
And she can’t stop Joe’s free speech

Palin’s one ornery mama bear
Yet she has many enemies
God, we’re so thankful she’ll never get those votes
Election’s far out of reach