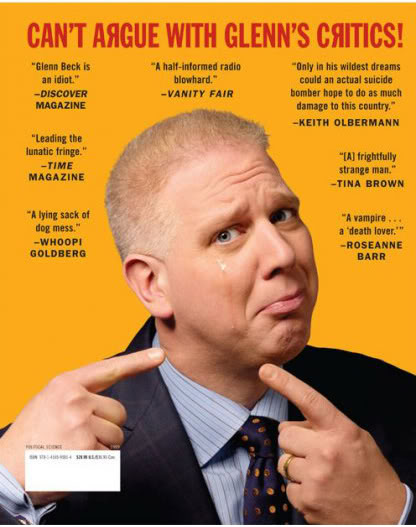 Fox News‘ Glenn “Cry Me A River” Beck played a documentary film on his show last Friday. It was titled, “Live Free Or Die” (I wonder if the people of New Hampshire are happy with his use of their state slogan?) and it feebly attempted to misinform his audience that fascism is a creation of liberals. The fictional film built upon that hypothesis to come to the ridiculous conclusion that the Obama administration is leading the United States on a path of genocide. Honestly, did Glenn Beck really curb his drug abuse years ago? There is certainly no outward evidence that he is clean and sober.

So, the next time some brainwashed Glenn Beck fan starts to parrot these falsehoods to you, don’t just brush him/her off. Fire back with facts and logical reasoning. It is people like Glenn Beck and their hate fueled insane ideologies that are a danger to our nation. It is our job as patriotic and informed citizens to ensure that his misinformation does not become an accepted doctrine of the ignorant masses. Let’s get out there and do what we can to educate our families, friends, co-workers and children about how Fox News pundits will do whatever they can to preserve ignorance in an attempt to trick Main Street America into believing that far-right-wing conservative policies are in their best interest.

Ok then, now for some fun. Please remember to click on the song link below to familiarize yourselves with the tune and to have more fun singing along with today’s song parody.

The Fool On The Hill song link: http://www.youtube.com/watch?v=3KXrrh74wTs&feature=related

THE FOOL WHO KNOWS NIL

(sung to the Beatles song, “The Fool On The Hill”)