Palin vs Johnston: The Thrilla In Wasilla 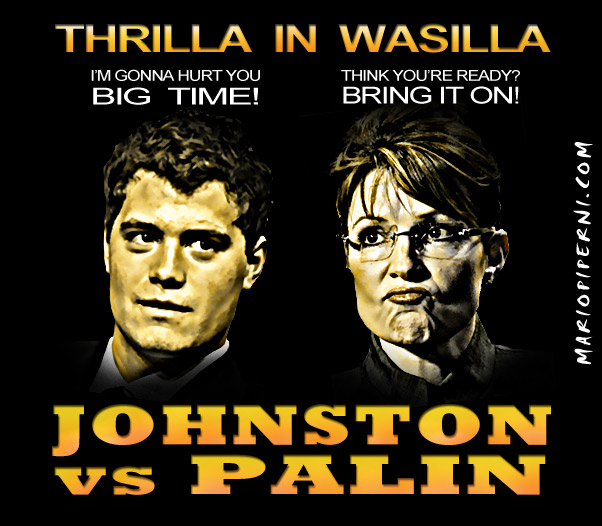 Wow, the Sarah Palin Ghost-Written Rural Hamlet Book Tour is barely underway and the gloves are off already. The first punches of this round of the Sarah Palin/Levi Johnston never-ending feud were thrown by the former ex-quitting governor of Alaska. She appeared on Oprah and told Oprah Winfrey (and a nationally televised audience) that she believes that her once and future former son-in-law Levi Johnston’s Playgirl Magazine spread constitutes, “porn” and that she finds it, “heartbreaking” to see the road the father of her grandson has taken. She also told Oprah that Johnston lied about living at her home. Palin followed up that left hook/uppercut combination with an additional jab or two the next day on Good Morning America (with another nationally televised audience) when she told host Barbara Walters that Johnston is a liar and then implied that he is a disinterested father to boot. While discussing a potential legal custody battle between her daughter and Johnston, Palin said,

It will be nice to see in I guess even legal proceedings a desire to be a part of the baby’s life. That’s a good sign.

Johnston took those blows in stride and countered with a daring fusillade of his own. He appeared on ET (a/k/a Enterainment Tonight) and let loose with this,

That’s total bullsh*t. I did [live with the Palin family] for a few months, then we split up and that was it. I think this interview is really gonna kick up some things, I don’t think she wanted to do that.

Them sure sounds like fightin’ words to us here at Lynnrockets’ Blast-Off. Unfortunately after Levi’s remarks, the bell sounded and that round was over. Now is the time to go and get some more popcorn and the adult beverage of your choice before the next round begins. Tune in again for live action tomorrow. Same Bat-Time. Same Bat-Channel.

In honor of the troops, today’s song parody musically illustrates the intriguing Sarah Palin/Levi Johnston relationship. Remember to click on the song link below to familiarize yourselves with the tune and to have more fun singing along with the parody.

The Ballad Of John And Yoko song link: http://www.youtube.com/watch?v=_t3oaPNJieg

THE BALLAD OF SARAH AND LEVI

(Sung to the Beatles song “The Ballad of John and Yoko”)

Posing in a condo in New York,
Levi about to remove his pants
He now has a knack
To annoy SarahPAC
Yet most of them will still want to take a glance

Christ you know it ain’t easy,
You know how hard it can be,
To play second fiddle,
To the Caribou-Barbie.

Sarah claims that she is embarrassed
Really, she just envies his fame
Katie Couric did say,
“Can you pray away gay?”
“And can you point out some newspapers by name?”.

Christ you know it ain’t easy,
Those interviews on TV.
Reviews were not glowing
For the brain-dead Sarah P.

Levi’s camped-out in the Manhattan Hilton,
Media folks want him to speak
The newspapers said,
“What’s going on in your head?”
He said, “I think Sarah just wants a quick peek”

Christ you know she’s so sleazy,
She won’t speak without a fee
The next show she’s doing
Will be with Sean Hannity

Keeping every penny of per-diem pay,
Lying about clothes to charity,
Daughter that’s unwed,
Is someone inbred?
Her chance to win election, pretty low – Think!

Relatives all getting arrested.
Family dignity in free-fall.
McCain’s folks still claim,
“Palin was to blame”
But Sarah says that they dropped the ball

Christ you know she’s so sleazy
She lies so effortlessly
But Levi is going,
To crucify Sarah P.

How did Mac choose Sarah to begin with?
She is just a political hack.
A dumb “hockey mom”,
That can’t think and chew gum.
Why didn’t he select “Joe Sixpack?”