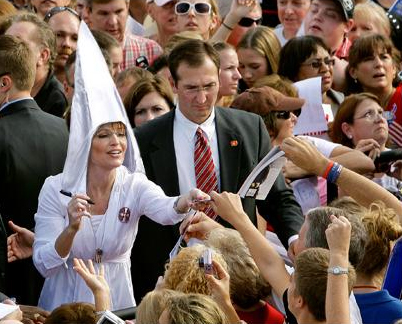 Sarah, we hardly knew ye. Wouldn’t you know, we go on vacation and Sarah Palin quits. If we had known that that is all it took, we would have taken a trip last September.

Palin’s abrupt resignation as Alaska’s governor last Friday was certainly welcome, but it also causes some concern here at Lynnrocket’s Blast-Off. As you know, this blog dedicates itself to lambasting all things Republican. We have a lot of fun pointing out the numerous inane actions and statements of the likes of Rush Limbaugh, Man Coulter, Mark Sanford (and Son) and Bobby Jindal(bells), but Sarah Palin is without peer when it comes to supplying hilariously ridiculous material.

The following is just a short list of funny Palin utterances:

– “Pallin’ around with terrorists”

– “Putin rearin’ his head over Alaska”

– “The libral media”, and our favorite…

We hope and pray that she stays in the national spotlight for a while longer. The best scenario would be for her to run for President in 2012. Can you imagine the gems she will come up with while running her own campaign? Imagine the hilarity as she debates relatively intelligent Republican primary candidates and is forced to appear on serious television programs such as Meet The Press or Face The Nation.

Today’s song parody is a nostalgic look back at those Palin days.

Please click on the song link below because it makes singing along a lot more fun.

Those Were The Days song link: http://www.youtube.com/watch?v=X5pkkAhETYg

(sung to the Mary Hopkins song “Those Were The Days”)

We’d scream in unison “oh, God, please why us”
Please wave your hand and make her go away
If you don’t believe us then just try us
We’d be so glad we’d call a holiday

Those Palin days my friend
We thought they’d never end
Dumb and confused forever and a day
Her Naughty Monkey shoes
She never had a clue
God help you if you’re female, black or gay

Two years left before the next election
Not the darling of the G.O.P.
There would be no Palin resurrection
Exit the Wasilla Hillbillies