Sarah Palin And The Todd Squad 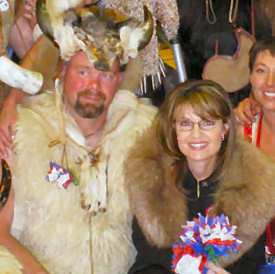 Todd and Sarah Palin exchange vows at their wedding.

We have had enough with all of the Sarah Palin stories (for a day anyway). Let’s turn our attention to her husband, Todd “the First Dude” Palin. This guy is a real work of art.

Like wife Sarah, he was a college drop-out. Unlike Sarah, he stayed dropped-out rather than floating around five or six safety schools for the next six or seven years. He has owned a couple of failed businesses and has been employed on and off by BP, an oil and natural gas company headquartered in England. That comes in handy when your wife is the governor of an oil producing state. He has also been a “community volunteer” in youth sports. For those of you that do not know what a community volunteer is, well, it is sort of like a community organizer, but you do not actually convey any civic knowledge or empowerment.

Todd Palin is most well known however, for his meddling in affairs of state. he seems to hang around the governor’s office and makes himself available for such important endeavors as strong-arming state employees that do not agree with his wife and doing what he can to get state troopers fired. He also likes to participate in being a party to official government emails and modeling clothes that he receives from the Republican National Committee.

Most recently, Mr. Palin practiced his formidable negotiating skills with daughter (and unwed teen mother) Bristol. He offered to buy her a car if she ended her relationship with the baby’s father. Hey, in the Palin family, money talks. The baby should be very proud of Grampy Palin when he grows up and learns of that part of his family’s history.

Oh, and lest we forget, the First Dude also challenged 62 year old comedian David Letterman to a fight two weeks ago. Now that is what we call a man’s man.

Click on the song link below to have more fun singing along. When the song window opens, please click on the “play” icon which appears in the upper right hand corner of the new window.

SHE GOT YOU, DUDE

(sung to the Sonny and Cher song “I Got You, Babe”)

We say they’re dumb and eat brown snow
She can’t find her way to Juneau
Well he don’t know if all that’s true
But she got him, her very own First Dude

Todd did not stay in school too long
During debates, Sarah’s answers are wrong
They live off of the state dime
Per diem pay funds a lifetime full of crime